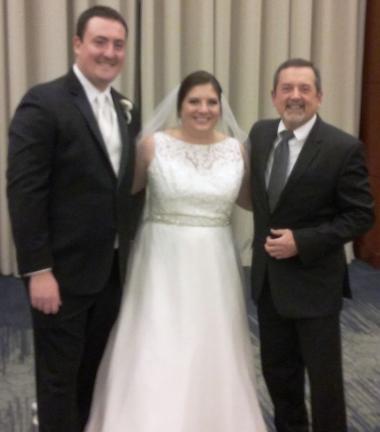 Mike and Meghan were married on December 19 at Eaglewood Resort in Itasca. This place if beautiful and much larger than I expected, sitting on over 100 acres and with almost 300 hotel rooms and a seeming endless supply of meeting and banquet rooms. They are just a few blocks from the intersection of Lake Street, 355 and 290. I had never seen it before because it is a few blocks north of Lake Street. Mike and Meghan were a really fun couple to work with. They are both easy going, really into each other and didn’t seem to be a bit anxious about their wedding – although a story Meghan told me before we started the wedding sounded like someone in the group was a little tense. Mike and I walked in and took our spot front and center, both moms came in and were seated and the lighted then candles for the unity celebration. Everyone was surprised when the next thing to take place was a bagpiper playing his pipes and walking down the center aisle. Mr. Pipes stood off the side up front and played throughout the procession and then left after the bride arrived. This was another ceremony with laughter, tears, fun and seriousness and it ended with a great celebration as bride and groom kissed. The bag piper entered and played as he made his way to front again and then escorted the bride and groom to the back of the room where he continued to play until the bridal party had all exited. It was a first for me and I loved it – I had a great Irish Blessing at the end and then the Bag Pipes!