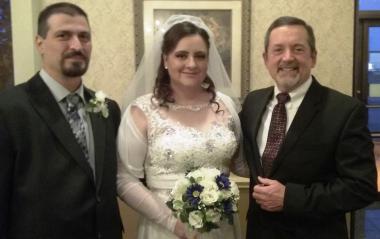 Katherine and Rocco were married on 10/17/15 at Crystal Sky Banquet Hall in McCook, IL. The venue has 3 ballrooms that are very attractively decorated and is a ideal setting for a wedding. Katherine has two children who stood up with her and Rocco for the ceremony and all four were involved in the unity sand ceremony. The bride’s brother is a DJ and handled the music for the ceremony and reception and was a great guy to work with. Katherine’s mother is recovering from back surgery that happened less than a week before the ceremony and was able to attend the ceremony in a wheel chair. The ceremony went very well. 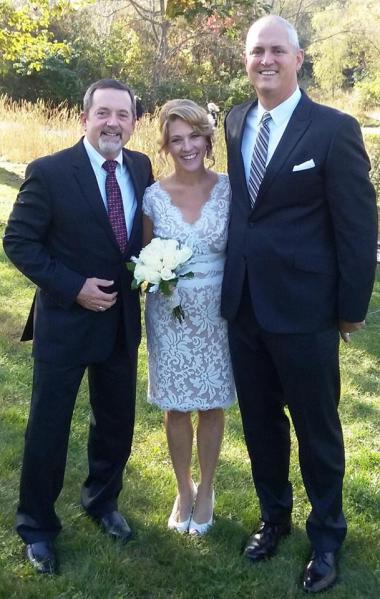 Mark and Vicki were married early afternoon on 10/10/15 in Lippold Park in Batavia along the Fox River. The park is newly developed and is right along the Fox River Bike Trail. Mark and Vicki love the area and have a 6 mile circuit they often follow on both sides of the river to walk their dog. After the ceremony there were cyclist, joggers and walkers along the trail cheering the couple. Some people on the trail had fun yelling out “Photo Bomb” as they went by and one couple and their child ended up leaving the trail and joining the celebration when they realized they were next door neighbors. The weather was absolutely perfect for the wedding. 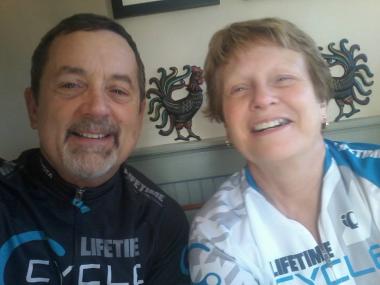 Debbie and I enjoyed a morning ride on the Fox River Trail and breakfast at one of our favorite spots, Benedict’s, before this weekend’s ceremonies. Biking always helps me relax before wedding packed weekends! 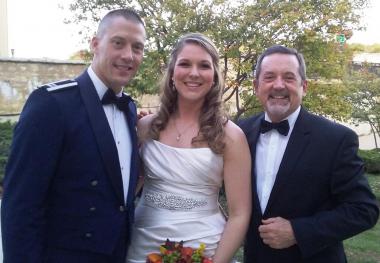 Amanda and James were married in the evening on 10/10/15 at The Herrington in Geneva. This venue has a beautiful setting for both outdoor and indoor ceremonies. Lots of pictures were taken in the garden next to the Fox River but the ceremony was in an ideal indoor chapel. The couple choose to give their vows to their children who were included in several parts of the ceremony, including the Sand Unity Celebration. James and Amanda live in another state and we had a couple lengthy Skype sessions to complete all of the planning for their ceremony. 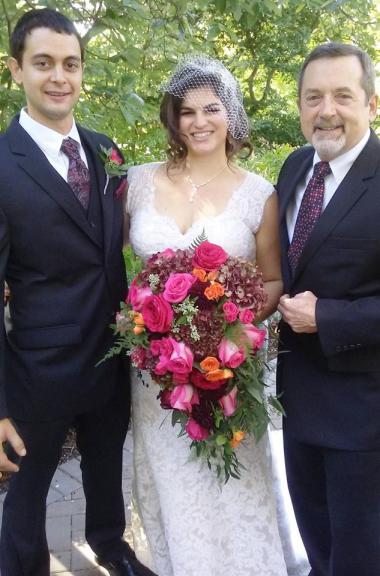 Alex and LeAnn were married on the morning of 10/11/15 in the Fragrance Garden at Morton Arboretum. The weather was picture perfect for the ceremony. I added a “Blessing of the Hands” to the ceremony in which they hold each others hands and I have them look at the hands of their partner as I describe how their hands will be used to work together and care for each other throughout their marriage. Just as we started that portion of the ceremony a bee showed up and landed on the bride’s fingers – he crawled around for a while and I brushed him off. The bee wanted to hang around and I had to shoo it away. Most of the guests could see it happening and it added a cool memory to their ceremony. The couple also choose to do the 7 Steps/Blessings Ceremony which has both Hindu and Native American roots. I gave a vow and blessing for each step and after it is given they take a step. By the end of the 7 vows, they have completed a full circle. 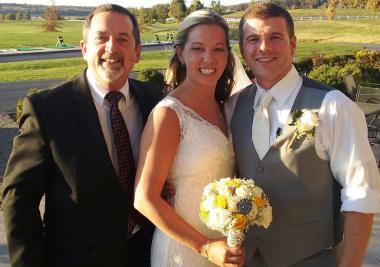 Amanda and Daren were married in the evening on 10/11/15 at Whitetail Ridge Golf Club in Yorkville. The weather was perfect for an outdoor ceremony and the guests were very responsive to the ceremony. Amanda’s father did a reading of several scriptures. The golf course had quieted down as the sun was close to setting by the time the ceremony started. 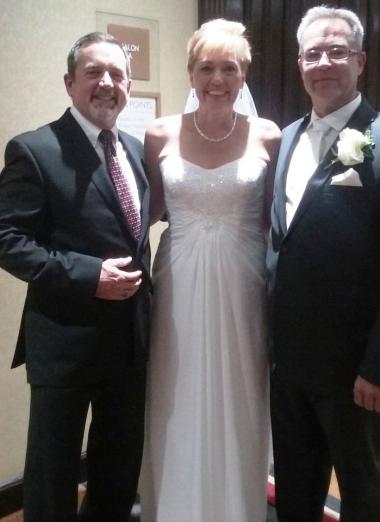 Richard and Susan had a beautiful ceremony at the Four Points Sheraton near O’Hare airport. Susan’s sons walked her down the aisle and the crowd got a big kick out of the two of them “giving away” their mom to be married to Richard. Richard and Susan used sand pouring for their unity celebration and involved the 3 adult children. Susan put her sand in first, then the 3 children and then Richard poured his on top – it was a really cool thing to watch and very meaningful as they symbolized their care for – and having the front and backs of their kids. 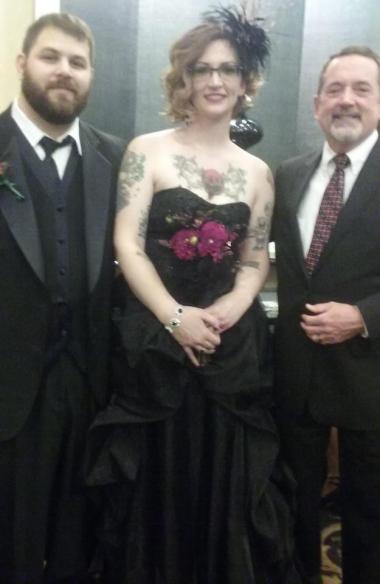 Jim and Diana were married at the Seville in Streamwood. This couple had a fun wedding surrounded by family and friends. The ring bearer stole the show by wandering up and down the aisle and looking over the crowd several times – it was pretty cute. A lot of emotion was expressed while the vows were exchanged and it was very moving for everyone involved. These two have great families and it was fun for me to have the opportunity to spend time speaking with many of them. 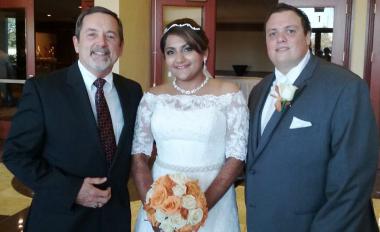 Daisy and Bill were married on the evening of 9/26/16 at the Meadows Club in Rolling Meadows. I had never been there before and it is a impressive gigantic hall used for corporate conventions, weddings and shows. Daisy’s family is from India and Bill is from the USA. The couple had a traditional Indian wedding in the morning and a Christian wedding in the evening. They had a really full day and it was really interesting to hear about the proceedings in the earlier ceremony. The guy handling the music for the ceremony was about ½ hour late – but everyone handled it well. I told the guest that we had a technical difficulty that was taking a little while to fix and they could get up and visit until we were ready to start. This couple has an absolutely great story about their relationship that I shared in the ceremony. Their ceremony went extremely well and I received a lot of positive response from the guests. An uncle talked to me after the ceremony. 48 years ago he met his wife on one day, they got engaged the next day and married at the end of that week. The Pastor tried to talk them out of it, but they went ahead. He was then shipped off to Viet Nam right after the wedding and they were not together again for about a year. Their marriage has not only survived, but done very well . . . what a cool story!