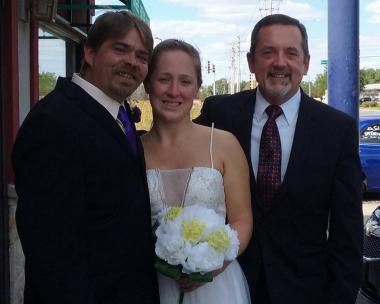 Sean and Katherine are now officially husband and wife as of 2:25 p.m. today. They wanted a simple ceremony at the place they met. They are great couple and really have tons of nice friends. The father of the bride did his job flawlessly and the father of the groom was so happy for his son that he kept wiping tears from his eyes. PJ’S has a large covered outside eating area that worked perfectly for the wedding. 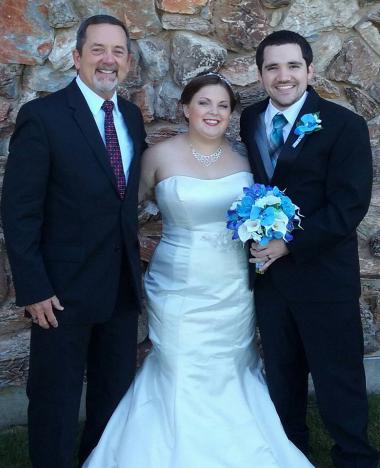 Chris and Shelby were just married in a beautiful outdoor ceremony at the Villa Olivia Golf Course. I can almost see my house from where they were married. The weather was absolutely perfect for an outdoor ceremony. We had to chase a few bees away part way through the ceremony and everyone got a few chuckles out of that! For the unity celebration the bride and groom had a wooden box in which they placed love letters to each other as well as a bottle of wine. The box was sealed and will be opened on their first anniversary. 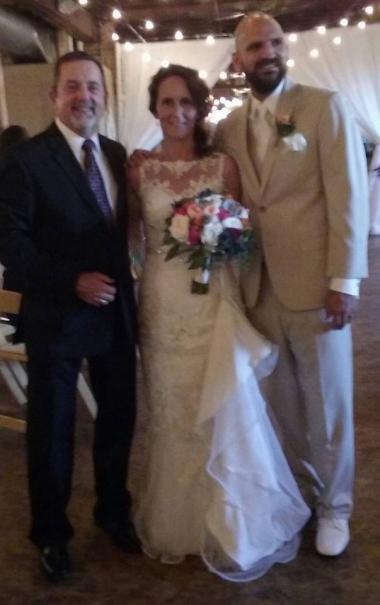 Carrie & Mike we’re married this evening at the Haight in Elgin. The building is very old rustic structure that makes a very nice setting for a wedding. They have an in-house kitchen and the food smelled really good too! These two had a very simple but very meaningful ceremony and had lots of good friends and family present. They gave out magic wands with bells and streamers on them for everybody to wave as they walked down the aisle at the end of the ceremony. The guests signed in on small wooden hearts that were then placed in a framed container. 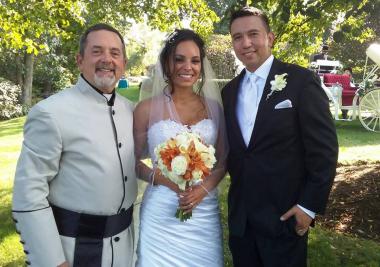 I married Angelica and Darvin today in North Barrington. These two met when Darvin had cancer. Angelica is a nurse and helped to bring Darvin back to health. When they said the “in sickness or in health” portion of the vows, it was understandably very emotion for both of them. We did several Filipino wedding traditions including the Veil and Cord in which they are covered with a veil signifying being clothed or covered together, they a cord is wrapped around them indicating they are bound together. The coin ceremony involves bride and groom passing coins back and forth and making promises regarding the stewardship of their money and taking care of their family. The bride and her father arrived in a horse draw carriage and then the bride and groom left in the carriage at the end of the ceremony. The wedding was outside and under a giant tree next to a lake. The shade and the breeze helped make the near 90 degree temperature almost comfortable. 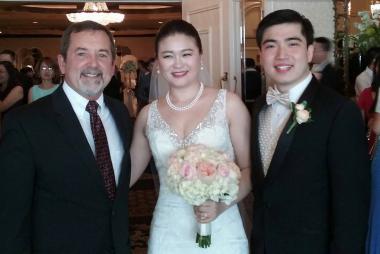 Wen and Shuo we’re just united in marriage at The Carlyle. The wedding went very well it was a very beautiful ceremony. The bride and groom wrote their own vows and Wen when said hers in Mandarin. The picture does not do justice to her dress, it is one of the most beautiful flowing wedding gowns I’ve ever seen! 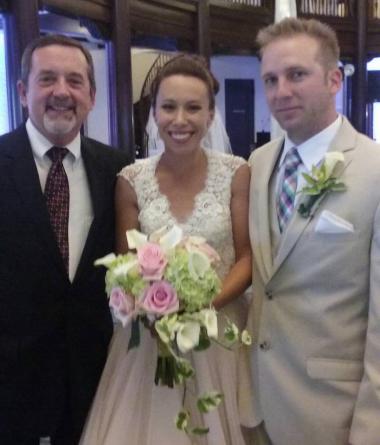 I just completed the wedding ceremony for Morgan and Joshua at the Baker Hotel in St Charles. It has been cloudy and threatening rain all day but the weather cooperated and they had a beautiful wedding ceremony overlooking the Fox River. At the very end I gave an Irish blessing that starts with these words “May you feel no rain for you will be shelter for the other.” Just as I said that, a couple of droplets hit the page and the bride and groom both saw it happen! It was pretty funny. That was the only rain we had and everybody is out in the garden enjoying some refreshments. 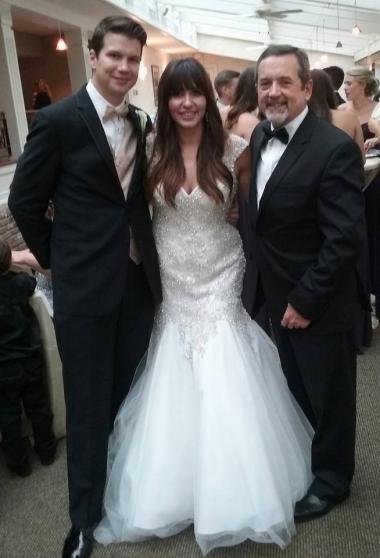 I married Chad and Kim about 45 minutes ago out on golf course. We had a good rain this morning and it’s been threatening rain all day but the weather cooperated and the ceremony went very well. This is a fun loving couple and the ceremony was a lot of fun for everyone. I concluded with an Irish blessing and told everyone I had chosen it especially for this occasion. The blessing starts with these words “May the raindrops fall lightly on your brow.” Everyone got a good chuckle! They are still outside for the cocktail hour and so far no rain, but it looks like it could come down at any minute!

Courtney and Aaron were married on the Bloomingdale Golf Course in a very fun ceremony. One of the bride’s maids was very emotional and that in turn seemed to have an impact on several members of the audience. The temperature was hot and we were right in the sun but there was a nice breeze that kept us from overheating. The groom was escorted in by both of his parents and the father of the bride placed his daughters hand into the hand of his new son-in-law and it was very touching. The bride and groom stopped to kiss twice while walking down the aisle and everyone clapped and cheered.