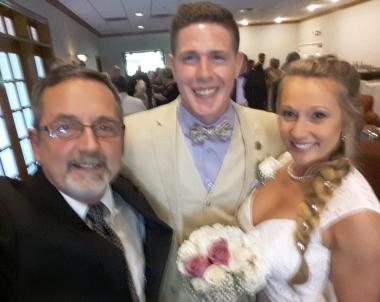 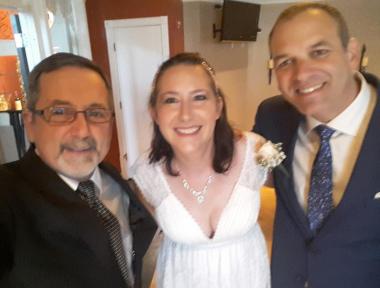 Ron and Christy were married at the Enzo and Lucia Ristorante in Long Grove on Saturday, July 14. We had originally planned to have the wedding outside by a beautiful fountain in the back garden area of the restaurant, but it was raining lightly and the wedding was moved inside to one of the private banquet rooms. Everyone at the restaurant was extremely helpful to make things work for the wedding.

This was the first wedding I officiated for in which the couple had a Ketubuh signing. The Ketubah is a Jewish marriage contract, outlining the responsibilities of the bride and the groom. The Ketubah confirms that the couple are both willingly accept each other and assume obligations to one another. One of the oldest elements of a Jewish wedding, the Ketubah dates back over two thousand years. Today the Ketubah is more spiritual, and not usually legal covenants that the bride and groom make with one another. Often the bride, groom and Rabbi signed the Ketubah in the presence of two witnesses, family and friends. Ron and Christy chose to have it as part of the ceremony and it was a wonderful addition to a very nice family oriented wedding. 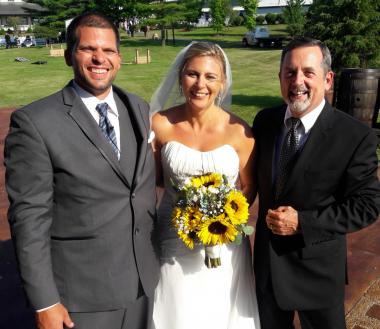 Sarah and Mike invited me to be involved in their wedding ceremony at Kuipers Farm in
Maple Park on Friday the 13th of July. I had a great time officiating their ceremony and
they were fun to work with. Kuipers Farm is a great setting for an outdoor wedding and
they have a fun train ride that the wedding party and guests can take after the
ceremony.

Sarah and Mike use the Unity Cross for their Unity Ceremony. They got the cross
online and it was a nice addition to the wedding. There is a base for the cross with a
small drawer in it for them to store a love note to each other. The main cross in put in
the base by the groom and represents his leadership and protection of the bride. The
bride then has an ornate cross that is placed inside the larger cross that represents her
beauty and the many capabilities of women. The crosses are held together by three
pegs placed by the couple which represent the trinity and the scripture stating that a
three stranded cord cannot be broken.