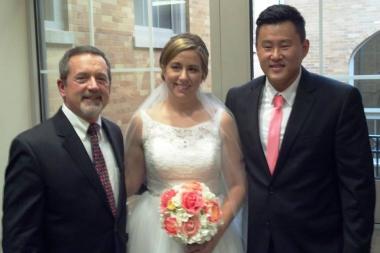 I performed my first wedding ceremony that actually started early tonight in the Koten Chapel at North Central College in Naperville! HoJoon and Amanda are a great couple and their announcement invited people to come 1/2 hour before the ceremony – and even the late comers were there before the 5:30 starting time – so we got going 10 minutes early. Hojoon’s parents traveled from Korea to attend. His mother read several scriptures in Korean and his Uncle read them in English. They had small stones for each person to take upon entering and markers so we could put our initials and any brief message we wanted to write. Each person was asked to hold their stone during the ceremony and they were collected at the end and will be in a container in their home.