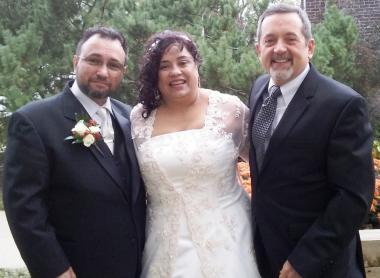 Flor and Jimmy had an outdoor wedding at the Friendship Park Conservatory on 10/24/15. I asked them about the license at the rehearsal the afternoon before the wedding and they had forgotten to get it. There was still time, so we hurried up the rehearsal and they dashed off to the county clerk and got their license. It had been rainy earlier in the day on the 24th, but the rain moved out of the area and the temperature dropped a little before the ceremony and the winds were pretty strong. We were in a courtyard with lots of plants, a couple of fountains and a pair of cooing doves. It started to sprinkle just as we started the wedding – but only a little – and the rain held off until just after the last guest had entered the building for the cocktail hour.